The Structure of Committee

Continuous Crisis can be complicated and fast paced. It is important to have a strong understanding of the structure of this type of committee in order to do well and have a good time. Continuous Crisis committees have two parts, the “Frontroom” and the “Backroom.” The Frontroom refers to the committee room itself and the public actions and events that take place there. The Backroom itself is the physical location wherein the Crisis Director and Assistant Chairs (MUNUC committee staff) respond to notes and directives, plan crisis breaks, and craft the world outside the committee itself. The Backroom is a wonderful place with many snacks, but delegates do not go there. We will go into more detail about these two areas later but for now it is important to understand the way in which they interact to advance the committee, and the way you as a delegate fit into this system.

As the name suggests Continuous Crisis committees rely on a series of crises to advance the committee. These are cooked up by the back room staff and communicated to you in the form of crisis breaks. Crisis breaks can take many forms from simple news broadcasts to more interactive negotiations or interrogations but are designed to convey the gist of the issue that needs addressing. It is the committee's job in the frontroom to solve or address the crisis at hand through the collective action of directives. Meanwhile in the backroom delegates can act as individuals to shape the world around them, build up power, and even create crises in the Frontroom that they can use to their advantage. Along with being actual places, front room and backroom represent a more symbolic divide between the two worlds of crisis, public and private. The actions taken in one might have an impact in the other but ultimately you should keep in mind that they are separate and treat them as such. Trying to respond to frontroom crises in the backroom will not get you very far in either. 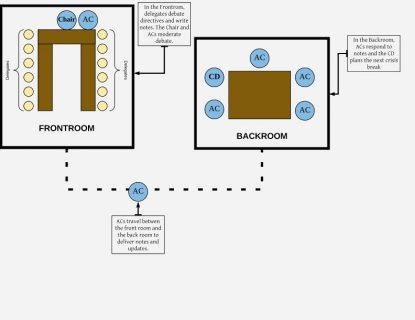 The executives of the committee are split between the Frontroom and the Backroom. At the front of the committee room is the Chair, who will be in charge of guiding the Frontroom. The chair moderates debate and guides delegates through the directive-creation process. In Crisis the chair is also in character; if the committee is a presidential cabinet, the chair will usually be representing the president. Along with guiding debate chairs also have ultimate discretion on whether to allow certain debates, proposals in directives, or anything else and their decisions should be respected. Along with the chair the other executive on the committee is the Crisis director. The Crisis Director manages the backroom. Their job is to create crisis breaks, synthesize the actions of the Frontroom and individual delegate arcs, and guide the general course of the committee. They aren’t usually the ones responding to notes but sometimes they do and they are also responsible for keeping track of all the arcs in order to plan breaks.
Along with execs Crisis committees are also staffed by assistant chairs, (ACs). ACs the ones who respond to your notes, act out updates, and assist with the Chair’s duties in the Frontroom. Each committee has several ACs who act as intermediaries between the Frontroom and Backroom. ACs collect information from the Frontroom, discuss this information with the Crisis Director in the Backroom, and then provide updates to the Frontroom.
The Crisis Director and the Chair can answer questions related to your broad strategy. For specifics regarding notes, those questions are better directed towards an AC.